Following the meeting with her Aunt and cousin Annie, for a maid she still remained, caught up with Gwen who was still working in the bedrooms and she spent the rest of her day at her duties. Maud and Emily sat discussing what Annabella had told them. Maud was not unhappy; she would remain in charge of all the finances and her lifestyle would not change. Annabella would require a residence for herself, Raymond, and her baby. Rodrick would be staying in the cottage, certainly in the short term. Emily had already told Annabella that she would do anything for her, but perhaps she should have given more consideration to such an open -ended gesture if she knew what Annabella had planned for her.

A temporary residence would be found for Annabella and Emily would join them to help Annabella to readjust in regaining the poise and grace of a lady. In due course, when Annabella felt ready, she would return to Buckshire manor with her family.

Maud stared at her daughter.

“Well I hope you are pleased with yourself, with what you have done. There was no need for it, no need at all. Annie was oblivious to who she really was this will not end well I am sure of it.”

Everyone that is fat was thin at some point. Dahlia had often wondered what exactly ran through their minds as they got progressively bigger. Did they see it happening? Did they not panic when their bodies started changing shape? Now she was gaining weight, Dahlia could understand a little better, though not completely. For the mind plays tricks on us all.

Those who successfully undertake a strict diet usually regress at some point as the body uses a variety of tricks to restore those suppressed habits, pulling away at a person’s subconscious. As Dahlia had long known, it takes an iron will to remain on top of things and keep one’s bad habits bottled up. Soften that up and one thing is certain, a person’s other desires will take hold.

Weight gain also tends to creep up on its victims. All is fine till one day you find a favourite dress is tight around the waist or hips. These were the thoughts running inside Dahlia’s head the morning we re-join her, as she prepared for the long day ahead. When we last encountered Dahlia, she was spending her days as Petra busy in the clinic, cleaning and attending to her duties around the large, converted country house. At the end of the day, she would return to her room where she would undress and reclaim her identity as Dahlia. A couple of days into this routine things were shaken up when it was suggested that she change rooms and go and stay instead in the servant’s quarters on the top floor. Despite some misgivings, Dahlia agreed, convinced that it would speed her ‘recovery’ by embedding herself deeper in what she imagined was the reality of being Petra.

It was late afternoon when the carriage pulled into the grounds of Sandowns and having removed the pram with little Raymond inside Annabella smoothed down his blanket.

“I will not come inside Emily, I will go back to our cottage to see Raymond and tell him the news, I am sure it will be as much of a shock to him as it is to me, I still cannot believe it, me a lady?”

Emily forced a smile she felt relieved, cleansed in some strange way but would have to tell her mother what she had done and was not looking forward to that.

“Yes, yes of course Annabella, it’s all true, what I have told you, I will see you in the morning, wear that pretty dress again, not your uniform, you won’t be needing that again will you?”

Annabella stumbled from a halted curtsy, that was going to be a hard habit to break, she had curtsied to most others for as long has she had known.

Read more »
Posted by Camille Langtry at 2:00 AM 9 comments:

The doctor was regretting his decision to drive all the way to the resort at which Melissa was staying. He should have taken a redeye flight at the crack of dawn, but had somehow convinced himself a two-day road trip would have been better. It was now over two weeks since he had last seen Melissa. Since then he had been busily attending to her sister’s journey of discovery as she unveiled her self-destructive streak. To get away for a few days would be a welcome relief. No matter how you framed it, screwing with people’s heads was morally repellent and it took a toll on the doctor, who was only too happy to escape the confines of the clinic for a couple of days. It also helped that Melissa’s treatment was less morally dubious. Indeed lifting her out of her malaise might be seen as a positive endeavour in its own right.

He had intended to visit much earlier, but Dahlia’s rapid progress had meant he had needed to stay at the clinic almost constantly. Were he to commute regularly, given the clinic’s isolation, he would have been spending too much of his time on the road. Besides the amount he was charging Dahlia justified cancelling his other patients for a few weeks. Even so, he could not neglect Melissa. For his plan to work, he needed to make sure that the ‘viable option’ he was crafting for Dahlia existed. For that, Melissa’s adherence to her own ‘timetable’ was critical.

Martha’s revelations both amused and intrigued Carol the chain of events set in motion by Miss Annabella’s wish to experience the life of a maid bordering on the surreal. Lady Hogarth having certainly exploited and manipulated the situation to her advantage. But for Martha’s indulgence of Miss Annabella’s fantasy, and indeed her own involvement in creating maid Annie, from the precocious privileged Miss Annabella, Lady Hogarth and her daughter would be none the richer for sure. Lady Hogarth had outwitted the Countess with the substitution of her own daughter for that of the Earl, more shame on the Countess for not knowing her stepdaughter better. Carol laughed to herself. Even she had been taken in, the change in personality had been put down to her trauma, which was credible enough, and a doppelganger, Lady Hogarth’s daughter certainly was. Martha had known all along, indeed a co- conspirator. Once Lady Hogarth had entrapped Buckshire manor’s housekeeper into her scheming with threats of the law, for what she had done with Miss Annabella, she could not escape for fear of her liberty. The money Martha now had stashed away an even greater and continuing inducement to continue the subterfuge.

Reducing the Countess to the status of housemaid had indeed eclipsed the subjugation of young Miss Annabella, the actual Mistress of Buckshire manor wearing the livery of her own maids and put to work in her own manor, and work she had. Carol had taken great pleasure having the Countess dancing to her tune.

Three months under her harsh tutorage and it was as if she had been born into servitude with her stooping gait and flared frock curtsies to her betters. Rewarded well she had been, but she would have paid good money to slap and strap that bare backside into submission and acquiescence into its new life. More the pity that she had been spared a continuation of her torment.

When she first started experiencing anxiety attacks a few years ago, Dahlia attended several self-help workshops that purported to give their attendees ‘greater consciousness and awareness’. Dahlia found some relief in what they said, but, like clockwork, the next fashion show would soon approach and her anxieties would return.

Even so her time there was not a complete waste. One particular idea had lingered long in Dahlia’s mind and she recently found herself reminded of it. Serious changes in our lives, when they happen, are largely something brought about by factors out of our control. Therefore, rather than fretting over change, we need to grow to accept it and adapt as best we can. Dahlia bit her lip hard as she contemplated those words. It had been ten days now since she had been checked into this exclusive clinic and she was already feeling nervous as to what she had let herself in for, wondering how she could accept the changes she was experiencing.

It was normal for Dahlia’s mind to wander when she was mopping. Though physically taxing, these simple chores relaxed Dahlia and gave her the space to explore the inner recesses of her mind. Right now she was reliving last night’s encounter with her doctor, dwelling upon how their recent interactions had changed.

The first visit by the judiciary, on the six-month anniversary of Connie beginning her life of a maid, to ensure that the Countess of Buckshire, Lady Constance Montgomery, was not abusing her situation and was indeed complying with the conditions that had been accepted for her, went well, very well. The Governess-Matron of Whitegate Prison, Miss Stanford- Brown, amongst the select inspecting group was most impressed. There was no evidence of pretence, Buckshire manor truly had a new and attentive maid in Connie, Miss Stanford- Brown congratulating Mrs Hardwick for her work in cajoling the privileged aristocrat into a live of servitude.

Annabella had grown to realise her mother’s scheming was not really for her benefit at all, but for her own. With the real Annabella Montgomery hidden away at Sandowns, indeed happy with her life, being Lady Hogarth’s maid, and lady Constance, her aunt, forced into servitude at Buckshire manor the waters had closed nicely above the conspiracy to defraud Miss Annabella and the Countess from their rightful inheritance. No one being aware or even suspicious that Annabella was a fraud.

Sandowns had been totally renovated and refurnished and Lady Hogarth, having made the most of the power of attorney she held for the Buckshire fortune, entertained, and socialised at her leisure, money being no longer being a consideration. 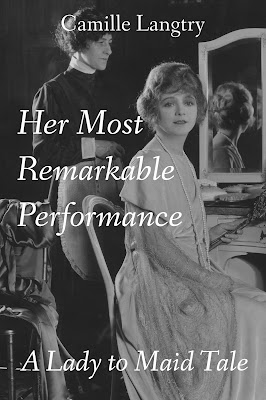